Scenes From a Jeep 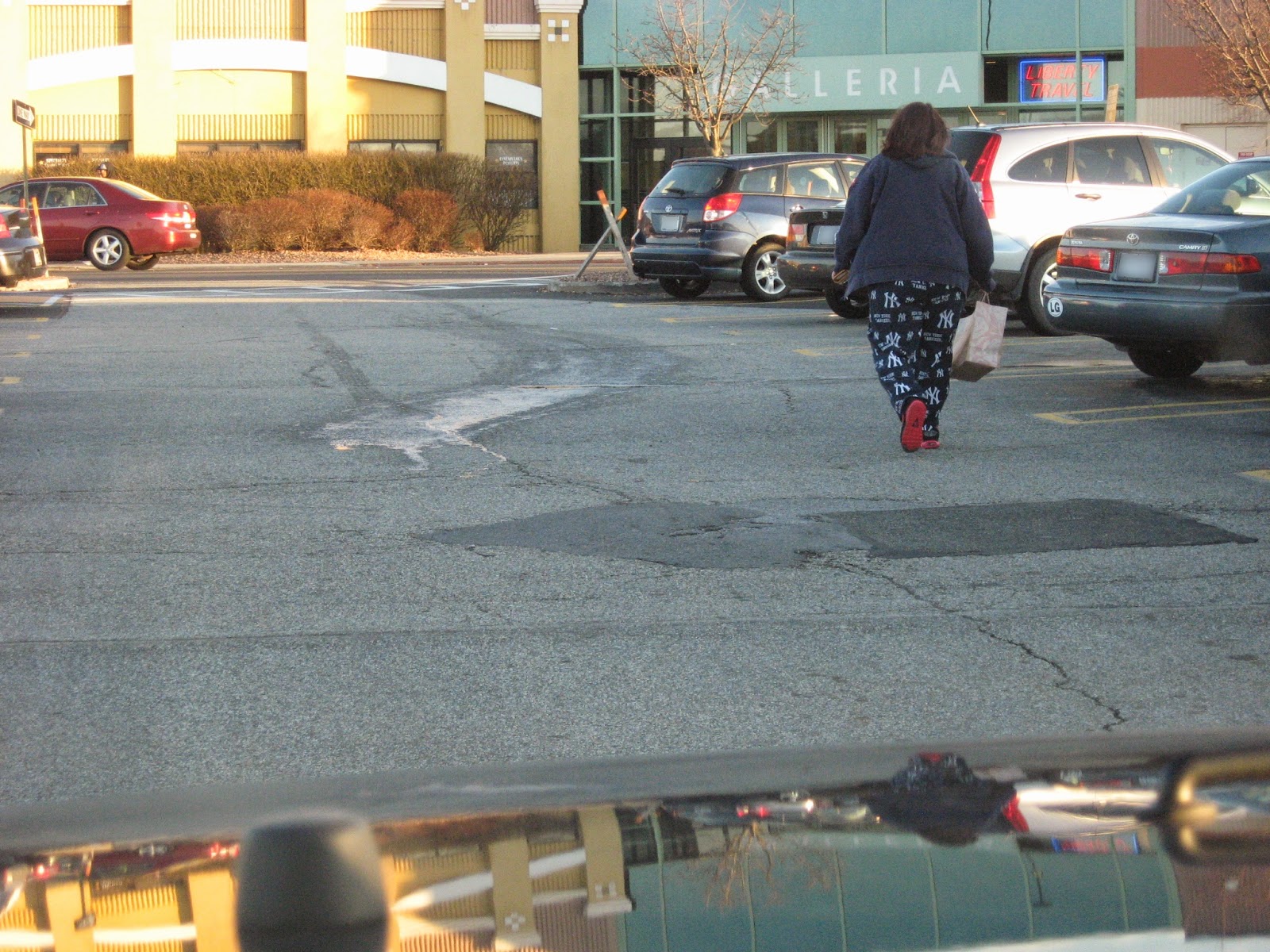 In this scene we are crawling through the mall parking lot. This activity is appropriately named “mall crawling” - driving the trail rated Wrangler to shopping centers more often than through forested terrain. And it is a much maligned and debated practice among Jeep Wrangler owners. What exactly is “mall crawling”? Why is it an issue? And is it really such a bad thing?
I learned this term reading through the Jeep Wrangler Internet forums. Search “mall crawler” and you’ll find plenty of discussions on how the Jeep was built for the trail. It is argued as the most capable off-road vehicle ever built for the consumer. The big tires (which can be swapped for bigger), high ground clearance (which can be lifted higher), and low-geared 4 wheel drive (which can be geared lower) are all said to be wasted on suburban moms and dads doing nothing more with this powerhouse than crawling the parking lot at the mall!
I can easily see this point of view. Add to that, the beloved vehicular version of man’s best friend can be optioned-up to include heated leather seats, painted fenders and top, and electronics that would make Captain Kirk blush. But it gets worse for the die-hard off-road Jeepers. Some have observed perfectly good Jeeps modified with 22” sparkle-y wheels, low-profile tires, and enough chrome to blind a man on a cloudy day. All of these Jeeps will likely never taste the dirt, sand, and mud as they should.
Let’s flip to the other side for a moment and see things from the alleged mall crawler’s point of view. The new Jeeps are more comfortable than older models. You can even get a 4-door now. The man (or woman for that matter) who missed his “Jeep-ortunity” when younger can get one that fits the whole family. Even the wife enjoys driving it to… where else?… the mall! Heated seats, leather, and killer electronics are in every other vehicle, so why should he sacrifice? The shiny version with paint-matched trim looks good in the city and doesn’t make the in-laws ask if he’s moving the family to a survival shelter in the mountains. Finally, the man ponders, “They built it so why should I be judged for buying it?”
So how did we get here? Answering that question will, I think, lead us to a peaceful state of co-existence, and dare I say, co-dependence. We all know the Jeep got it’s start in war. The United States Army needed a general purpose vehicle and went with the Willys-Overland Model MB. They named it in grand Army style as the GP for General Purpose Vehicle, pronounced “jeep” by its first drivers who must have been in some sort of hurry when speaking the acronym. They were likely getting shot at and didn’t have time to say “Quick! Let’s get in the G-P and get out of here!” the way the Army had intended.
But there’s more… Plenty of things developed during war time became inseparable parts of regular life. I'm not saying that was a good or bad way to do it, but that's what happened. We got quicker development of things like the airplane, food preservation, and telecommunications. These advances along with the post-war prosperity led to the interstate highway system which connected the cities, and helped grow interstate commerce and manufacturing. People used those highways to move to the suburbs and build houses with room for more stuff. The desire to get more stuff to put in their houses led to… wait for it… shopping malls and general purpose vehicles to haul the stuff! You probably saw that conclusion coming.
Think of it as one of those circle-of-life things. Just as we can fly in a jet plane that descended from a big bomber, we can drive a 4-door, family-packed, fully-loaded “Jeep of today” to the mall for some frozen yogurt and a ride on the merry-go-round for the kids.
Where though does that leave the true off-road Jeeper who’s still a bit horrified at how things turned out? The good news is that he can still find joy in all of this. The Jeep’s popularity makes it so he can still buy one and use it for what it was designed – crawling rocks and trudging through deep mud. And there’s yet another circle-of-life thing going on here from which he benefits. That mall crawler will get traded-in after a few years. That puts an affordable used Jeep with frozen yogurt-stained seats on the market. After a lift and some big tires, it may never see the mall parking lot again.
So… “Can’t we all just get along?”. I don’t think there was ever any question really. The results of one of those searches for “mall crawler” assured me of that. The post opened with the almost accusatory title, “Are you a mall crawler?” Inside the post, though, the writer assured, “Don’t worry, we will respect you.” And respect they did. Many came forward confessing more mall time than trail time. Some true off-roaders admitted they did a little of both and offered words of encouragement to their mall-bound Jeep brethren. In the end, everyone was happy with their Jeeps no matter where they crawled.
Posted by fivenote at 12:00 PM No comments: 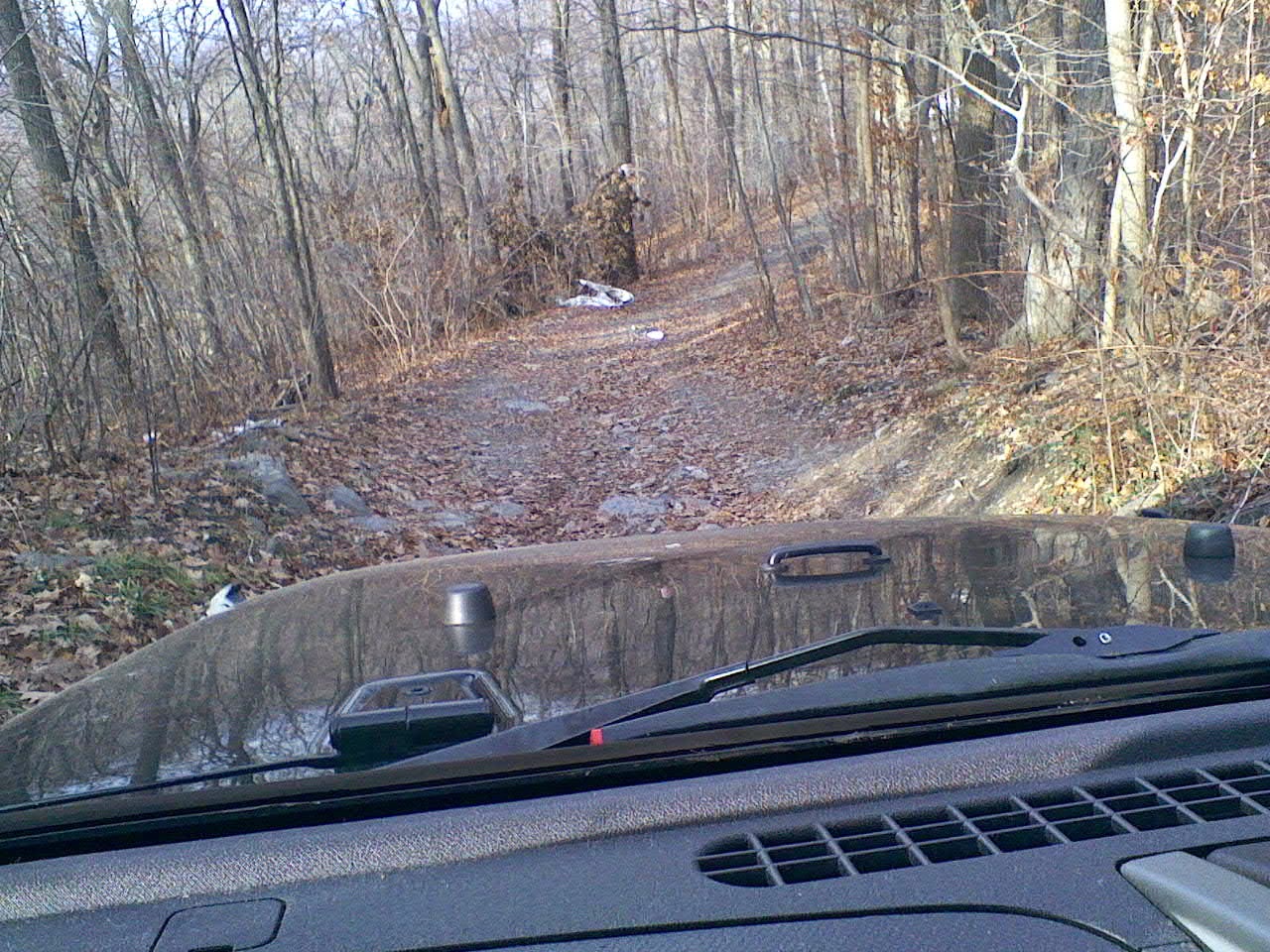 In this scene I am carefully navigating a rocky off-road mountain trail. Well, that statement is mostly true. I am carefully navigating. The “rocky off-road mountain trail” part is where the truth gets stretched a bit. It started as an effort to go out and do what rough and tough Jeep drivers do best. It ended with a single Facebook comment that all but shut down the man-parade.
I was visiting some friends in upstate New York one weekend. It was Saturday afternoon and everyone had some personal business to do before we would get together that evening. With a few hours on my hands, I hopped in the Jeep and headed to the only place nearby where one could even pretend to go off-road.
A few miles up the way was an old vacation community situated on the side of a small mountain. It's a quiet neighborhood of cottages that were used decades ago by city folk as upstate summer vacation homes. Today, most of the cottages are either abandoned or converted to year-round living. There's one long main road up the mountain and a network of trails that shoot off to the left and right as you climb. The trails range in quality from paved to rocky, with the ones at the top being the least maintained and best suited for some bumpy rides in a Jeep. “Here's where I'll have a little fun”, I thought.
And fun it was! I found the roughest of trails near the top, shifted into four wheel drive and had at it. The toughest section is actually a seldom used connector between two other main trails. That's where I snapped the picture. It looks like I'm deep in the woods, crawling the rocks, but I'm actually just about a hundred yards from the next cottage. But what a great shot to post on Facebook to impress my friends! So I posted.
I checked Facebook a little later and saw that a friend posted a reply. He said it was “Cool!” A short time later and another friend left more ego-boosting praise. I was feeling good. Then someone noticed the Jeep hood and asked about the kind of tires I have. This was great. I had a fun time on a bunny trail, posted a cool picture, and was getting all kinds of attention for my mad driving skills. How could this get any better!?
The answer soon came in the very next post. Everyone has this Facebook friend. It was none other than mom. Mom saw my picture. She must have read the posts from all my friends who thought I was cool and daring, and that wanted to know what kind of knobby tires I was riding on that would let me traverse such devilish terrain. Surely she could see the trend and be so kind as to add to it with some made up story about her backwoods offspring that chewed through the bars of his crib as a baby because he was already too wild to be confined!
So what did mom (whom I love and respect dearly, in case she reads this) write under my picture? Simply... “Please stay in Brooklyn where it's safe.”
Posted by fivenote at 12:58 PM No comments:

Welcome to Scenes from a Jeep!

The first and only blog dedicated to pictures and stories as seen from the inside of a Jeep Wrangler.

Brought to you by...